Home » About Us » APBD in the media

Portraits in Words and Pictures

APBD in the Rare Disease Report

They have a Rare Disease Resource Guide that includes very good information on rare diseases; with topics such as Diagnosis, Treatment, Clinical Trials and Registries, and Patient Advocacy Groups (which does include APBDRF).The Guide can be found at http://www.raredr.com/resource-guide/.

In addition, the Guide includes a number of links to other sites. One of the sites mentioned is http://findzebra.compute.dtu.dk/. It allows you to enter your symptoms and search for a disease. 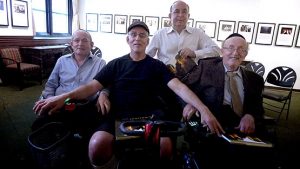 I love in life how one thing leads to another, especially if we are open to it. When I began having balance and mobility difficulty in 2003, I went, on the guidance of my primary care physician, to a neurologist at Cedars-Sinai Hospital in Los Angeles. After four years of too many tests to remember – including MRI’s, brain scans, CAT Scans, PET Scans, X-Rays, Spinal Tap (Lumbar Puncture), Nerve Conductivity Tests and more, with no satisfactory diagnosis, I switched over to UCLA in hopes of getting diagnosed. Meanwhile, my impairments were slowly, inexorably worsening. After two years of seeing a neurologist at UCLA, my case caught the attention and interest of Dr. Brent Fogel, whom I then began seeing. After nearly two years of testing, including a muscle and nerve biopsy in my legs, Dr. Fogel gave me a conclusive diagnosis of Adult Polyglucosan Body Disease, APBD for short, a rare, untreatable, inexorably worsening genetic disease that affects primarily Ashkenazi Jews. Dr. Fogel helped me get into a clinical trial at Baylor Medical School in Dallas, but I was unable to keep up with it. However, Mary Wallace, the associate of lead doctor Raphael Schiffman there, referred me to Susan Coddon of the APBD Research Foundation, a New York based organization serving those afflicted with APBD. Through Susan I met Dr. Jeffrey Levenson, who tirelessly runs the APBDRF on behalf of its founder (in 2005), Gregory Weiss, himself afflicted with APBD and wheelchair bound. Here, at the opening reception of my KINDSIGHT exhibit at the 92nd Street Y in NYC in September, 2014, I’m with Gregory (right) and his brothers, Michael and Emil, all afflicted with APBD. As I’ve written before about Judith Kraier and Deberah Goldman, there is a deep, instant, powerful connection among those of us living with this disease. We are bound somehow in this great challenge. I am grateful to Gregory in ways I cannot articulate for his forming the APBDRF and creating a blanket of connection among us that warmly transcends this lonely, difficult journey.